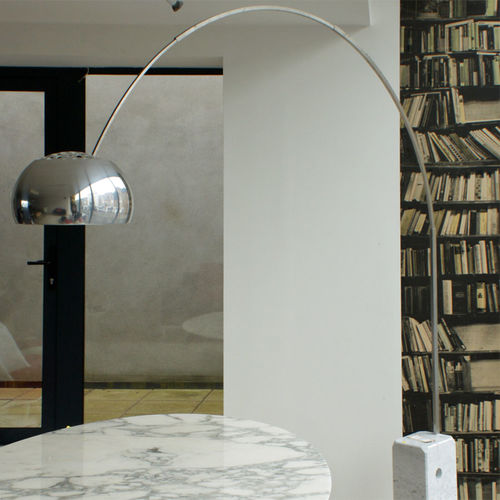 Why the Arco Lamp Replica Matters: A Little History on One of The Most Iconic Mid-century Designs

The Arco Lamp replica is really something to look at in terms of design and construction, but not everyone loves it. Some people deem it just “too heavy”, and others “too bulky,” almost like it shouldn’t belong in any home. It has a museum quality to it, that’s true, and it could do better on larger spaces, but this doesn’t mean you can’t use it as home furniture. In fact, that is its primary purpose.

Designed by Achille Castiglione in the 1960s, the idea for the Arco Lamp replica supposedly comes from a regular streetlight, the old kind of streetlight that you might still find in some European streets. Apparently, Castiglioni was taking a night walk when he became interested in the way the streetlight arched down and provided a concentrated beam of light out in the street.

A melting pot of texture, feel, and creativity

Back in the studio, Achille Castiglioni designed a prototype from steel, marble, and the idea of an elongated arch. The original shape of the floor lamp has mostly remained unchanged since it started production in the 1960s, but some the materials used to make it have changed tremendously. The Carrara marble used for the heavy base, however, and the shape and weight of the base itself, remains unchanged.

Nowadays, you can find it online for up to $4,000, while a great replica will cost probably $600, tops. Most manufacturers still use real Carrara marble, along with improved stainless steel for the arch and lamp head. However, some of them have turned to other materials and changed the design of the arch in order to make it lighter and more palatable to consumers.

The Arco Lamp replica, when properly constructed, requires two people to lift and carry, which is why the base has a circular peg hole. The lamp’s cover is still stainless steel, even today, but for some models it is a lower grade of steel and the head does not contain the much-needed holes on the top, which help the light from the bulb disperse much better into a space.

How does it feel to own a true-to-design Arco Lamp Replica?

Most people that have used it concur in the fact that the lamp is actually pretty comfortable to have around the house, regardless of aesthetic. Once you’ve found the correct placement for it, the Arco Lamp replica takes a hold of your space and lights it in a way that only a few other objects could imitate. Sitting by the light of the Arco Lamp replica feels a little like sitting under that very streetlight but in the comfort of your own home.

If you’re thinking about purchasing an Arco Lamp replica, you first need to make sure that you have enough space. This is one of the biggest floor lamp designs from the mid-century modernist period, apart from the fact that it can be very hard to lift by oneself. Most people employ objects like brooms to help lift the Carrara marble base and then find somewhere in their houses where the lamp can act as a centerpiece and light an entire broom.

Achille Castiglioni was an Italian furniture designer who is usually associated with the European mid-century movement. Separating himself from the aesthetic pursuits that characterized his colleagues, Castiglioni focused his work on everyday objects that, according to him, “had no trace of design in them,” producing many iconic and groundbreaking pieces of furniture through the mid-century modernist period.