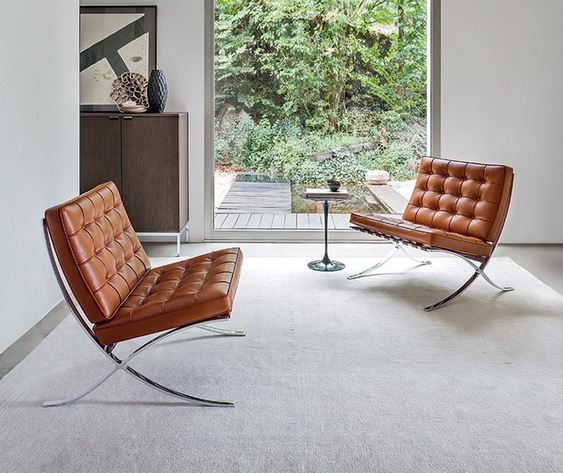 What Goes Into Making Our Iconic Barcelona Chair Replica?

Though many people think that this type of furniture is subject to various industrial processes, but the truth is that craftsmanship is still the way to go. In the case of the gorgeous Barcelona chair, it’s an integral part of the manufacturing scheme, one that’s not likely to go away any time soon.

The Barcelona chair has not made any headlines recently, except for the ones that we might put out ourselves. It’s great appeal, however, has remained largely unchanged. One can only imagine that part of its success has to do with mastery of technique and the perpetuation of legacy.

Every Barcelona chair is created with care, love, and patience, following Mies van der Rohe’s modern interpretation of the Roman “curules” that ancient rulers sat on at ceremonies. Lilly Reich’s input as co-designer is also very present on the sleekness and the final build.

It all started with the idea of a scissor

Though very firm and squared, the Barcelona chair was actually conceived to be curvier, an S-shaped idea of a bench that was “fit for a king,” as the designer himself described. The Spanish ruler at the time, Alfonso XIII, was attending the Barcelona Pavilion (hence the name) in which the chair first appeared to the public. Mies designed it specifically for that purpose.

However, its royal origins were not the only inspiration for Mies and Reich. The garden chair or bench, usually crafted out of metal and painted all over, was the basis for the final design. If you look closely at the Barcelona chair, you can see the logic behind its form.

In 1930, the first commercial production of the Barcelona chair started, only days after its appearance at the Spanish Pavilion. The metalwork was from the studio of Josef Müller, already a famous artisan in his own right.

The Barcelona chair underwent many changes to its first shape, but only material-wise. Better ways of welding the metal below its cushions became prominent, and the chair with them. Its royal origins again provided a space for it to be adopted into the elites of society, and it became a highly coveted object.

Nowadays, many reproductions and knockoffs of the Barcelona chair are produced every year. To avoid confusions, copyright claims, or other issues, some dealers tend to refer to it as the “Pavilion” chair. A great number of these reproductions only resemble the idea of the chair, but an original design (found at companies like Knoll today) is much more valuable.